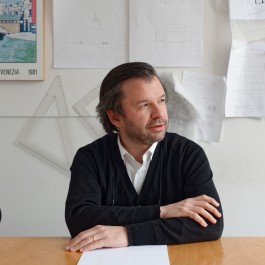 Degree in Architecture by FAUP, Faculty of Architecture of the University of Porto, in 1996. Collaborator of "Souto Moura - Arquitectos, Lda.", Between 1994 and 2002, including participation in projects co-authored by Siza Vieira and Souto Moura between 1999 and 2002.

Curator with Barbara Bogoni and conception of the exhibition "Eduardo Souto de Moura: architettura sulla storia", at Palazzo della Ragione in Mantua, Italy, opened on May 6, 2022.

Guest assistant for Project 5.1 and 5.2 chairs. at ULP - Universidade Lusófona do Porto (since 2012), institution where he is enrolled in a doctoral program.

Participation in the third debate of the cycle Interventions in architectural and urban heritage: design, criteria and methodologies, organized by the CPA - College of Architectural Heritage of the Ordem dos Arquitectos.

Online lecture part of the cycle “Atelier On!” organized by AEFAUP

Online lecture "Dos Proyectos", inserted in the cycle "PÍLDORAS procesos creativos", organized by the School of Architecture of the University of Navarra (ETSAUN), Spain.

“Works and Projects” conference within the scope of the “Porto Academy 2016” workshop, Faculty of Architecture, University of Porto, Porto

Conference “Two Works: the first and the last”, within the scope of the “Mãos à Obra” cycle at ULP, Porto

Conference "On Restoration and Rehabilitation in Architecture - 3 Examples in Northern Portugal" for "EuropaNostra", Palácio do Freixo, Porto

Conference within the exhibition "Habitar Portugal 06/08", Cultural Center of Ílhavo

Conference at the University School of the Arts of Coimbra