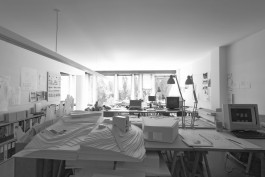 Nuno Graça Moura, Arq. Un. Lda. is a small architectural office, based in Porto, Portugal.
It was founded in 2002, although the project activity began some years earlier. Its main skills include a large experience in all project phases of a wide range of building types, the design of object, such as furniture and lighting and the curatorship of exhibitions and books aswell.
In these years, we have been invited for several conferences and wokshops both in Portugal and abroad and our architectural works have been published in specialised press in serval countries.
The office has been nominated for or named finalist of several international prizes, such as PREMIS FAD (Spain), Premios ENOR (Spain), AIT Award (Germany), BigMat Award (Europe), Reiners Stiftung Architekturpreis (Germany), Prémio Maria Tereza e Vasco Vilalva, of Fundação Calouste Gulbenkian (Portugal), having won the BAUWELT Preis 2011 – category “Living Spaces”, München, Germany  in 2010 and the ‘Prémio João de Almada’, in Porto in 2019.